My work as an artist

I work mainly with oil and watercolours but I do also paint on driftwood, polished and formed by the sea. I paint out of sheer curiosity and lust to explore the possibilities offered by the different languages of art. The butterfly often presents itself in my paintings - not every time though. It early became a symbol for my view on life and life´s meaning. The butterfly, with its splendid transformation fron larva - almost repulsive - to cocoon, the tranquility and contemplation in life and onward to its final unfolding into a never ending diversity of beauty, freedom and comeliness.A wonder of metamorphosis.I believe the same is true about humans. But to understand her transformation one needs a perspective of universal length. She develops in a fierce battle between life´s pain and joyful moments. Out of every difficulty she has to endure something new is hopefully learnt which can deepen her wisdom and feelings of affection. One day she too will unfold her wings, displaying a beautiful soul, a complete being - in a life after this. I use egg-oil-tempera with emulsion, layer after layer, to catch the spirit of life-like butterflies. It´s a slow process that demands patience but creates a luster and a tention which cannot be accomplished using ordinary oil painting methods. The technique of adding paint, in many layers, was mainly used by the renaissance painter in the 15th and 16th centuries, with Jan van Eyck as the most skillful of them all. It´s been said that he invented the method, but we know now that painters before him also used the technuque, although in not fully advanced form. The very same technique was also used by Rembrandt, With his painting in mind we are well into the 17th century. With flowing technique of water colours I illustrate more of a spiritual aspect of life. Here the butterflies fly freely, lightly and playfully. The watercolours won´t be controlled as easily, a thought ahead is necessary, but they will in return give you their wonderful spontaneity, which can result in a sucessful symbiosis of motif and expression. I use oil painting, of traditional kind, to portray landscapes, to experiment and to wonder along philosophical thoughts. Sometomes the images takes a path to the surrealistic domains. Exhibitions: Since 1994 I have held about 40 exhibitions. I have held solo exhibitions and also participated i several groupexhibitions, some of which were jury selected. Among them was Biennale Internazionale dell`Arte Contemporanea in Florence 2005 the largest and a huge experience. I have had exhibitions in Portugal, Spain and Denmark too. Member:Swedish Artists´ Association (SK)Swedish Artists - Culture 1Bildupphovsrätt i Sverige (Swedish Artists´ Copyright Association) 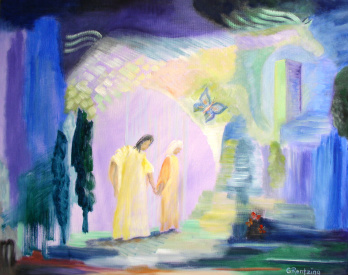